New Visions’ instructors are actively training martial artists who value lifelong learning, skillful movement, and a proactive community of karate practitioners. The dojo is directed by their 50 years combined experience and a genuine desire to share martial arts and propel students toward their best. 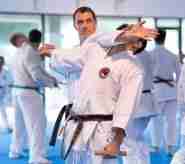 Ryan Guillemet has spent over 30 years training and 25 years teaching. He is a gifted teacher, lifelong student, and seasoned national-level competitor. Between his work as Program Director for one of the region’s largest karate schools and opening Elements Martial Arts in Chattanooga, he has guided thousands of kids and adults through their training, always giving 100% to each student.

He began training in Wado-ryu at age 8. A fully dedicated martial arts student, sensei Guillemet was only 14 years old when he realized his life’s work was teaching. He has studied under renowned Wado masters such as Otsuka II, Shiamitsu, Suzuki, and Takamatsu and several noteworthy local instructors within Wado-ryu Renmei. He holds roku-dan in the American Wado Black Belt Association; san-dan in Wado-ryu Renmei; sho-dan in Wado Guseikai, and most recently his san-dan in WIKF.

Sensei Guillemet studied psychology during his collegiate experience and remains an avid observer. A compliment to his martial training, he also explores physiology and mind-body connection concepts. 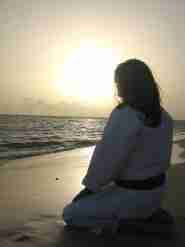 Chelsie Guillemet has trained in Wado for 20 years. Always a student, she is also a national-level competitor and attentive instructor. She sets her bar high and encourages others to dig deep and give their best. Sensei Guillemet brings female movement and training perspective to the dojo, fosters leadership, and aims to help students tune into their martial journeys.

Sensei Guillemet began training in Wado at age 9 and earned her yon-dan in the American Wado Black Belt Association; ni-dan in Wado-ryu Renmei; and sho-dan in Wado Guseikai. She has studied under several noteworthy local and international instructors. During her short competitive career, she became a 2015 NKF National Bronze medalist, took home wins from regional events, and won her local Wado Kata Competition (“The Ten”) two years in a row.

Sensei Guillemet studied business at Belmont University, graduating with her BBA (Music Business) in 2008. She continues to study the intricacies of the human mind and body, nutrition, and proper movement concepts.

I couldn’t be happier with New Visions Dojo. My son loves it and has grown in so many ways since he first enrolled.
Stephanie Ott
I've been enjoying lessons here with my wife for over a year. I used to take martial arts for a number of years, and after moving away for college I had a hard time finding a good dojo again. New Visions is a warm and welcoming community, great for both kids and adults.
Mathew Ostrander
Great staff kids love it.
Graham Walsh
Hands down best dojo in Middle Tennessee! My daughter and son LEARN karate here. We have reviewed several other schools. None are like New Visions Dojo.
Mitchels Photography
Previous
Next